I cover portraiture and commercial photography in the Cairngorms National Park and slightly beyond. I am situated in the picturesque town of Grantown-on-Spey and was owner of The Studio in the Square in Grantown from 2006 - 2016.

One of my favourite photographers Jeanloup Sieff said of photography:

I care very much that my work equals the very high standards I set myself and it is because of this I am fortunate to maintain a long working and friendly relationship with many clients.

Stewart was the BIPP Scotland Photographer of the Year in 2001. 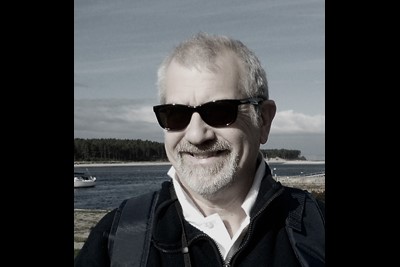 I was born in Dufftown in December 1954 and after three years in Inverness my parents moved to Grantown-on-Spey where I have lived ever since. I attended photography college for two years in Glasgow, starting in August 1973, and obtained my Diploma in Photography and also my Licentiateship of the British Institute of Professional Photography.

I enjoyed college. As part of our visual education our lecturers there advised us amongst other ideas was to always study magazines in which at the time were heavily dominated by outstanding photography, and I especially enjoyed Vogue and the Sunday Times magazine, which regularly featured the work of David Bailey and Terence Donovan amongst others. There was also, and still is, the fantastic National Geographic.

On returning home in 1975 I met my wife Doris. Later that year I was also fortunate to meet Pavel Satny. Pavel owned Aviemore Photographic, a business which had recently started in my home area and I was offered a job - that was in February 1976.

The beauty of working in Aviemore, at that time, was the vast range of photographic work we did. In the late seventies and throughout the eighties it was a real boom town and with work as varied as national newspaper assignments, PR and company brochures, conference commissions, and international sports events, as well as our wedding and portrait work it was photography heaven!

In the late eighties we were commissioned to photograph the Keepers of the Quaich banquets at Blair Castle - one of the whisky industry's major ceremonies worldwide which occurred twice a year - a commission which we continued until 2006. This led to work with many of the whisky companies including the brands J+B and Johnnie Walker, with which I still work for.

On the social side of photography I have always tried to maintain a very high standard in my wedding and portraiture work and have been fortunate to win some major awards - 2001 was a special year for me as I was named British Institute of Professional Photography's Scottish Photographer of the Year.

In 2003, to celebrate thirty years as a photographer, I held an exhibition of both my commercial and personal work at the Iona Gallery in Kingussie as well as in Grantown, and I was one of seven Scottish professional photographers selected to exhibit in Zoetermeer, Holland representing Scottish Photography

I left Aviemore Photographic in December 2005 to start The Studio in The Square in my home town of Grantown-on-Spey.

I had an exceptionally enjoyable ten and a half years in the studio finding some new clients and continuing my work with Diageo, the National Park, Glenfarclas whisky in the commercial field, and many more including some "well kent faces", in my wedding and portraiture work...I also realised the ambition of a small gallery in the retail area of the studio. In 2014 I received a Long Service Award from The British Institute of Professional Photography for forty years membership. When my studio lease finished, it was a very hard decision but I decided that I would now coninue working from home as Stewart Grant - Photographer but reduce the amount of projects undertaken.

I have been influenced by many, a lot of them photographers. 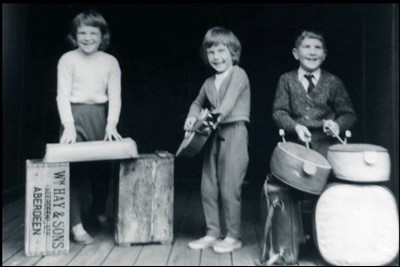 That's my first "band" with my sisters, probably 1964..notice the knitted cardigan doubling as a Beatles collarless suit jacket!!

Since I was in school my main interests have always been music, football and golf.

I collected vinyl singles and albums throughout the sixties and seventies, cassette tapes in the eighties and CD's ever since. Now we can purchase online and download from iTunes and listen to Spotify - as well as listening to radio programmes from all over the world on Net Radio. I recently purchased a new turntable for my vinyl collection so the circle begins again.

I also play the drums and I am fascinated by drums and the skills of so many drummers. I get annoyed at the lack of creedence given to drummers - as Primal Scream's Bobby Gillespie was quoted as saying "a band is only as good as their drummer".....although, I was told that a young boy said to his father, that, when he grew up he wanted to be a drummer. His father replied that he would have to choose between the two....

I have been watching and playing football since primary school and although my attempts at playing were enjoyable I realised that there were far better players than me, so I hung up my boots many years ago - and it has been great to see over the past few years the emergence of Highland teams capable of doing well in "top flight" Scottish football. I have also been invited onto the management committee of our local Highland League team Strathspey Thistle.

I also try to play a bit of golf with my wife Doris at Grantown-on-Spey Golf Club.

BIPP AWARDS APRIL 2004
Stewart was named both Portrait and Wedding Photographer of the Year. Stewart was the first photographer to win the portrait title three times, winning three times in the past four years. It is the first time he has won the Wedding title. He was also nominated for two other Gold Awards in the Portrait category. Portrait Gold 3 x Awards and AH Leach Trophy Wedding Gold 2 x Awards and Jack Boyd Memorial Rosebowl Illustrative Gold 1 x Award

your image is my image

capturing time that will never be the same again